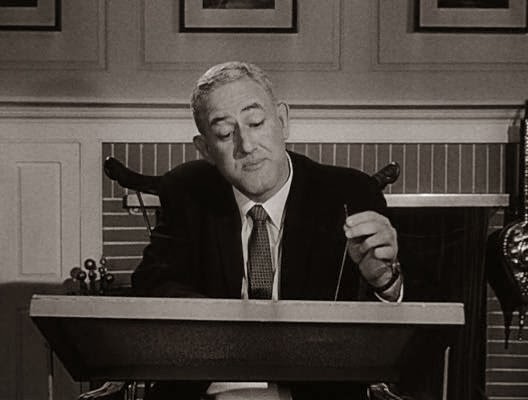 To celebrate William Castle’s birthday today, I suggest watching Homicidal (1961). It is undoubtedly the King of Schlock’s best directorial effort. The film, while shocking fun, manages to present the characters as three dimensional and raises some interesting gender issues. He also explores his usual themes of dysfunctional parenting, class inequality, and the lengths seemingly normal people will go to to win an inheritance.

Due to the impact of the twists in the story, I don’t want to go into too much plot detail. Let’s just say it starts with a seeming seduction and a surprisingly brutal crime and gets progressively crazier from there. Most of the story centers around Emily (Jean Arless), the beautiful blond caretaker of an aging, paralyzed nanny, Helga (Eugenie Leontovich), whose now grown-up charges pay for her upkeep in their family home. Arless (aka Joan Marshall) gives a remarkable performance as Emily. Sexy, yet frigid. Psychotic with sadistic tendencies, but also conveying a compelling self-righteousness. As the story peels the onion that is Emily, Arless rises to the challenge of portraying each layer.

Leontovich is equally brilliant as Emily’s powerless victim. Helga has been rendered mute as well as paralyzed from a stroke, and can only use a bell to communicate with others. While members of the family and her doctor perceive that she’s upset, she can’t successfully convey that Emily is the problem. Leontovich impressively uses limited facial movement to convey fear, frustration and desperation.

I have one complaint about the film: I wish Castle could have had enough faith in this picture to forego adding one of his trademark promotional gimmicks. He interrupts the film’s suspenseful climax with a minute long “Fright Break”, offering terrified patrons the chance for a refund, as long as they are willing to go sit in the “Coward’s Corner” in the lobby of the theater. Don’t take the coward’s way out, the ending is worth it.

Here’s Castle interviewing satisfied patrons after a screening of Homicidal:

Beyond the Femme Fatale Dating Tip:

A bell boy about to get a surprise at his impromptu wedding to Emily in HOMICIDAL.

Do not agree to marry a woman within five minutes of meeting her, no matter how much money she offers you.