There’s something for everyone, from the silent film novice to the die-hard fan, at the San Francisco Silent Film Festival, celebrating its 20th Anniversary May 28 through Monday, June 1, 2015 at the historic Castro Theatre. As usual, the festival provides an impressive range of programming. Well known Hollywood fare is on offer, such as the silent version of Lewis Milestone’s critically acclaimed All Quiet on the Western Front (1930) and Clarence Brown’s steamy Flesh and the Devil (1926), starring on and off screen lovers John Gilbert and Greta Garbo. But there are lesser known selections too, including Norrtullsligan, a 1923 Swedish comedy depicting four female office workers sharing an apartment as they make their way in the world. A format Hollywood would use repeatedly in the future, however, usually more darkly (most memorably in The Best of Everything).

This year, the festival has added another day of programming as well as a couple of new events. The New York’s Film Forum’s director of rep programming, Bruce Goldstein will host a trivia quiz called So You Think You Know Silents. Goldstein’s trivia quiz at the Turner Classic Movie film festival can only be described as fiendish, so expect gnashing of teeth from the contestants. The versatile Goldstein, along with the Gower Gluch Players, will provide musical accompaniment for Frank Capra’s The Donovan Affair (1929) later in the festival. For the first time, the SFSFF will present a live recreation of a lost soundtrack for a talkie. Besides providing music and sound effects, actors will dub dialog on the spot.

Beyond the careful programming and outstanding selection of accompanists, what makes the festival special is its focus on film preservation and restoration. Friday morning’s programming opens with a free event that provides a unique insight to that world, Amazing Tales of the Archives. Tales serves as a marvelous jumping off point for the festival. It’s a chance to learn of the effort and hard work behind preserving the world’s cinematic history and to sample the diversity of that history. The always entertaining Serge Bromberg is first on the bill. The preservationist, and founder of Lobster Films, will present Jacques Tourneur’s 1914 short Figures de cire (House of Wax) and share the 15 year saga of finding the film.

The following afternoon, Bromberg will receive the 2015 SFSFF Award after a screening of Visages de enfants (1925). The award is given to “organizations and individuals for to honor distinguished contributions to the preservation and restoration of silent-era movies.” Bromberg will also appear on stage in conversation with the legendary silent film historian and preservationist Kevin Brownlow prior to a screening of the newly restored Ben Hur: A Tale of the Christ (1925, Dir. Fred Niblo) which closes the festival. Previous SFSFF Award recipient Photoplay (Brownlow is one of its directors) and TCM restored the film. The film will be presented with a soundtrack scored by Carl Davis, probably the highest regarded silent film composer working today. 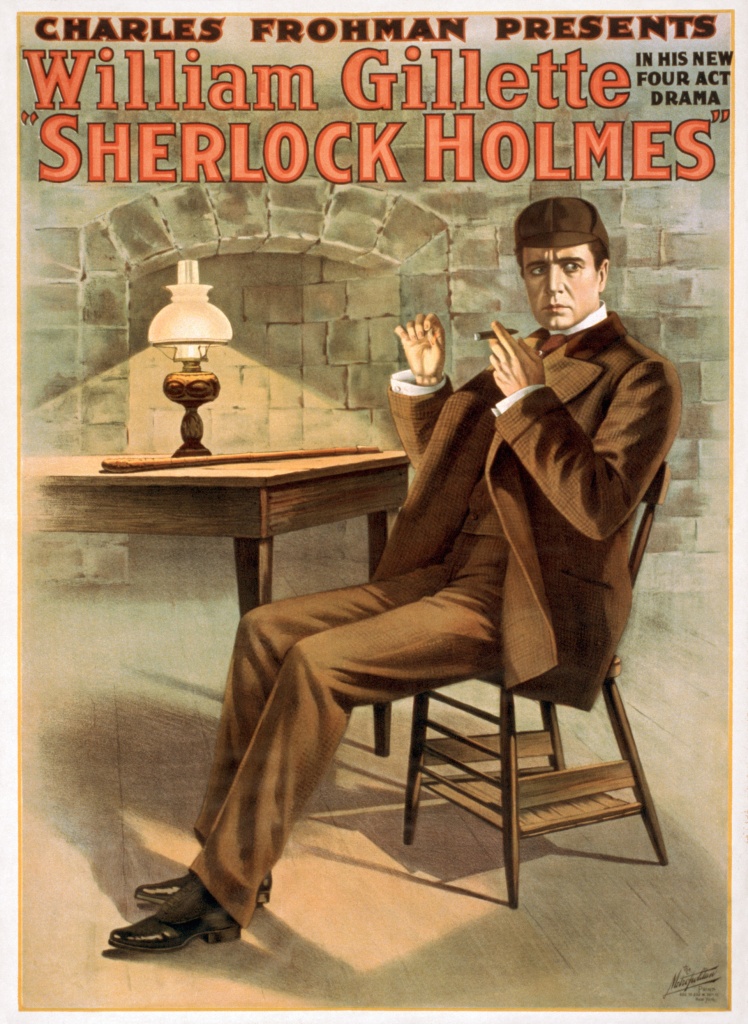 Film restorer Robert Byrne will also take the stage during Tales to describe the technical, historical, and curatorial aspects of reconstructing and restoring Sherlock Holmes (1916), starring William Gillette. The SFSFF and the Cinémathèque Française joined forces to restore the film, presumed lost until a complete dupe negative was identified in the vaults of the Cinémathèque last year. The restored film will play on Sunday night. Gillette originated the role of Sherlock Holmes on stage and many of the traits we associate with Holmes today were created by the actor and not by Sir Arthur Conan Doyle. For example, Gillette originated the deer-stalker hat as Holmes’ preferred chapeau, so iconic that even Benedict Cumberbatch’s modern day Sherlock still feels compelled to wear at press conferences. Holmes fans should be ecstatic at the prospect of seeing what has been considered the definitive performance of the role for the first time in 100 years. The closest they’ve been able to come to it before, was Orson Welles’ recreation of Gillette’s play and performance on his anthology radio drama, The Mercury Theatre on the Air.

The British Film Institute’s senior curator of silent film, Bryony Dixon will also present at Tales. He will screen the BFI’s collection of footage documenting the 1915 torpedoing of the British ocean liner RMS Lusitania by a German U-boat. The sinking of the passenger ship immediately caused an international outcry and the incident was invoked repeatedly in ongoing effort to enlist the United Sates in the alliance against Germany during World War I. Cecil B. De Mille exploited the incident two years later, for both commercial and propaganda purposes, in his film The Little American (1917) starring Mary Pickford.

The festival recently announced an addition to the Tales line-up, “2015 marks 100 years since the birth of the Technicolor Corporation. In recognition of this centennial, Movette Film Transfer’s Jennifer Miko will offer a rare glimpse of a unique home movie shot on the grounds of La Cuesta Encantada, more commonly known as Hearst Castle. We will feast our eyes on a stunning tour–filmed in two-strip Tech–with the architect, Julia Morgan, and the Chief himself, W.R. Hearst.” Donald Sosin will provide the accompaniment for the entire program. Actor Paul McGann, best known for either Dr. Who or Withnail and I depending on the audience, will provide narration for the Lusitania footage. The program is co-presented by Berkeley Art Museum & Pacific Film Archive and the National Film Preservation Foundation

Attending the SFSFF is like traveling back in time.  Attendees see silent film the way they were meant to be seen, on the big screen of a movie palace with live accompaniment and a companionable audience. Some of the festival goers even wear clothes from the 20s which adds to the period feeling. Learn more about this year’s festival and buy tickets at www.SilentFilm.org